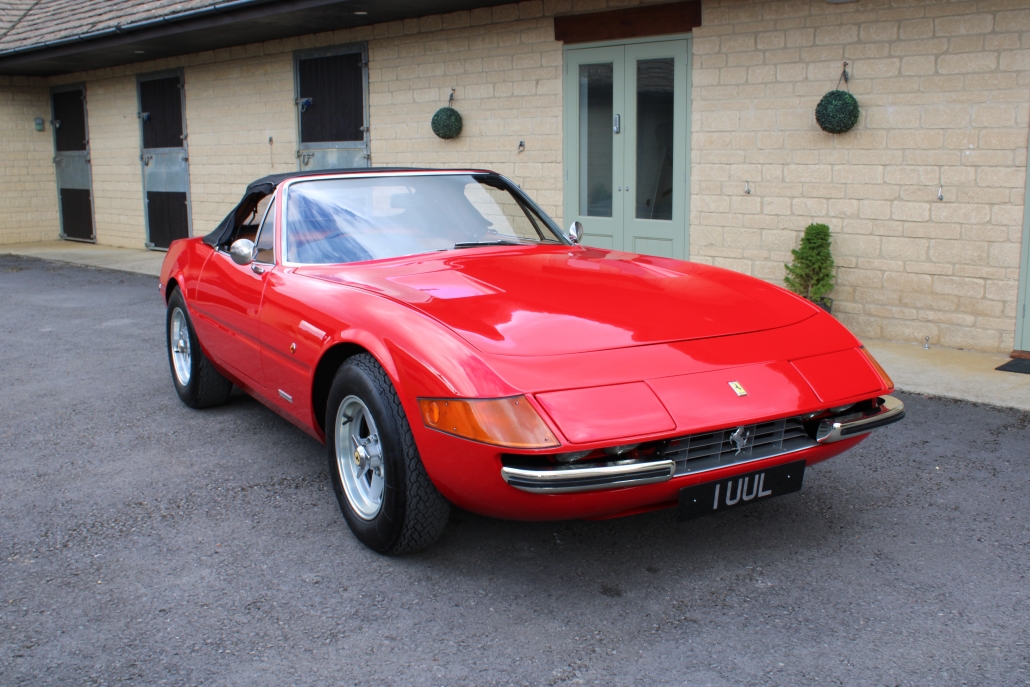 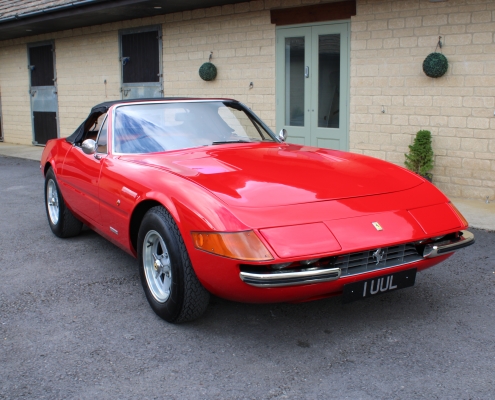 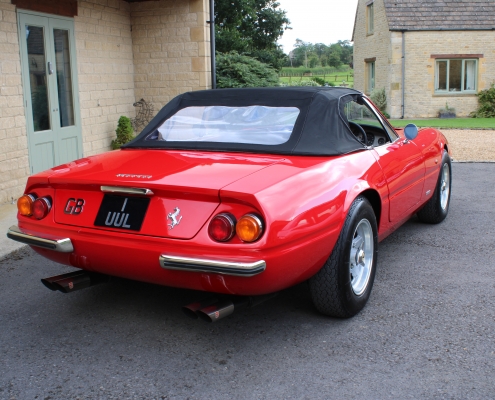 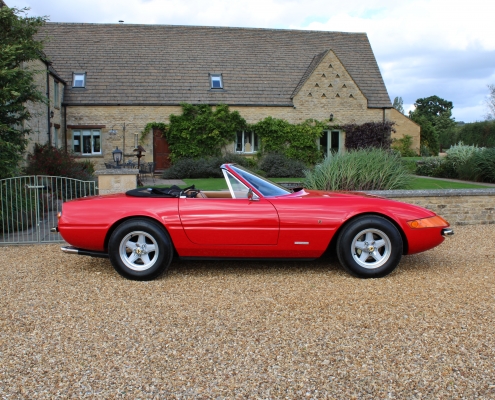 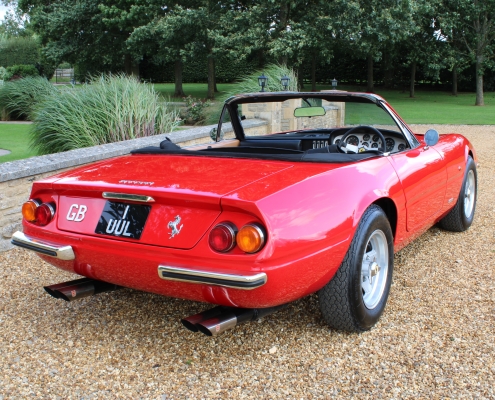 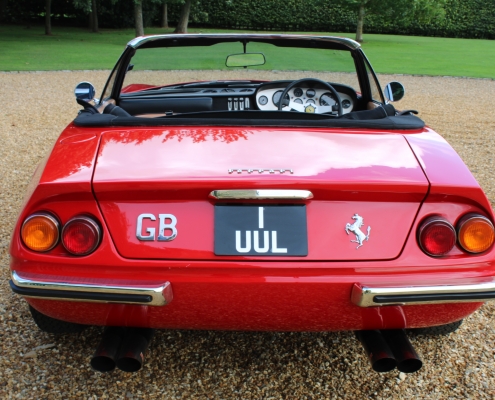 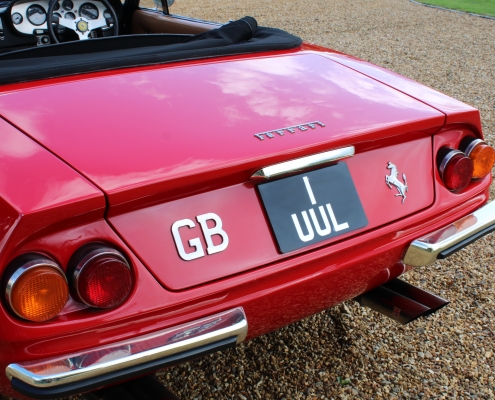 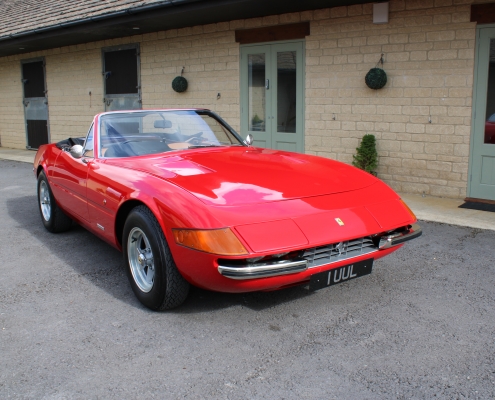 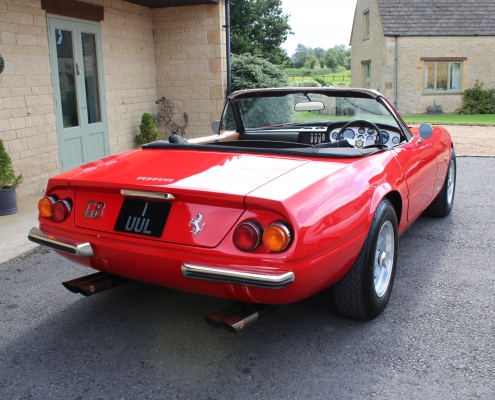 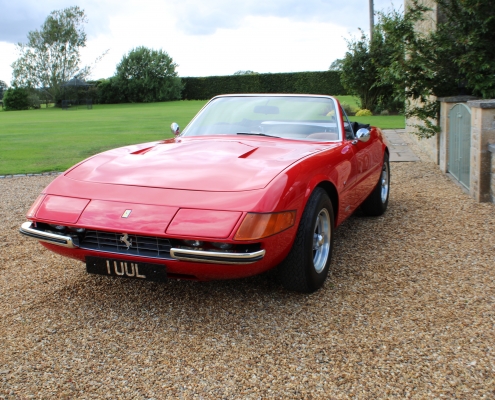 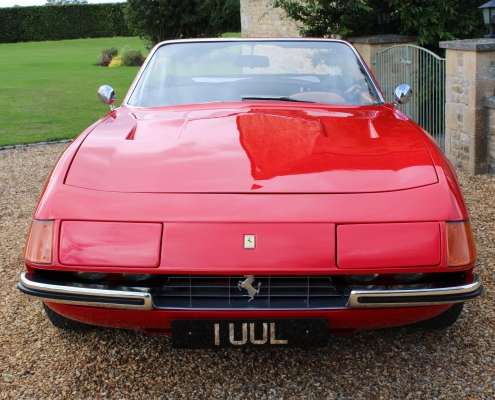 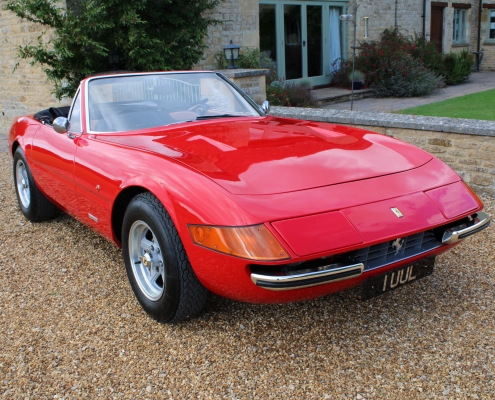 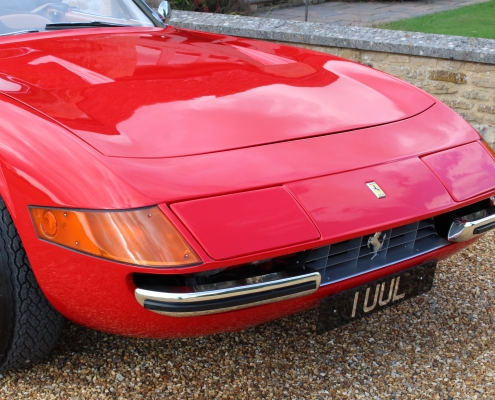 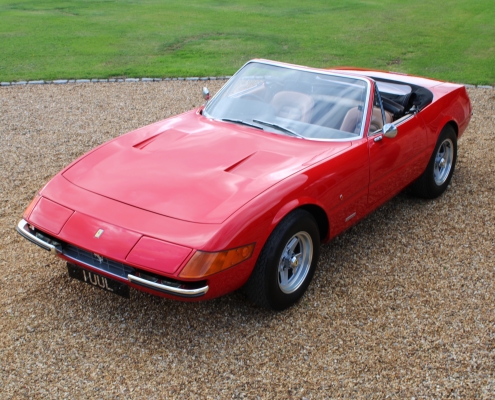 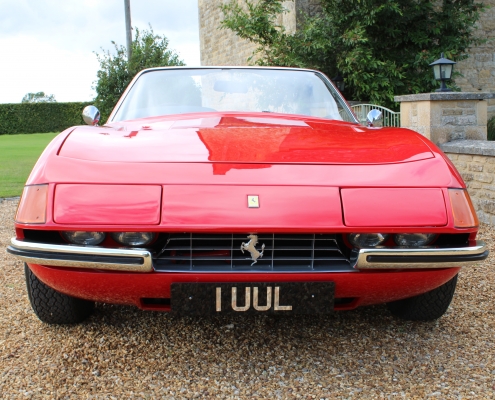 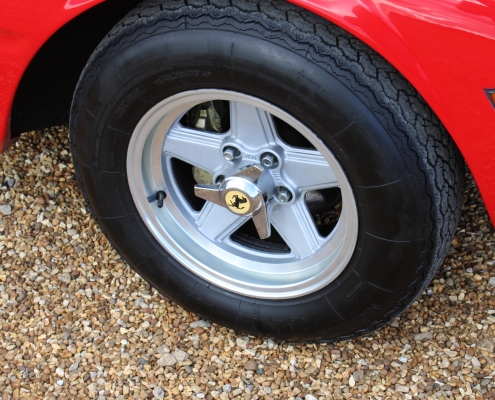 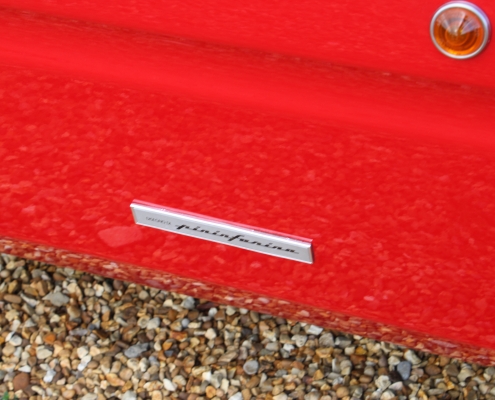 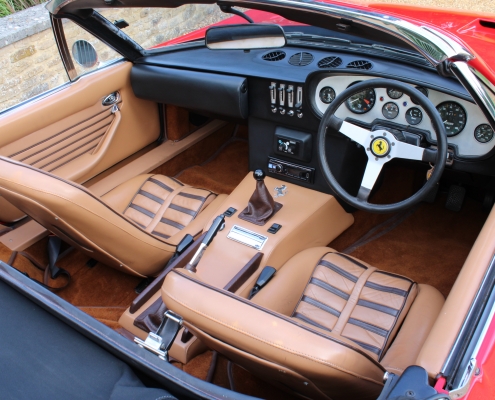 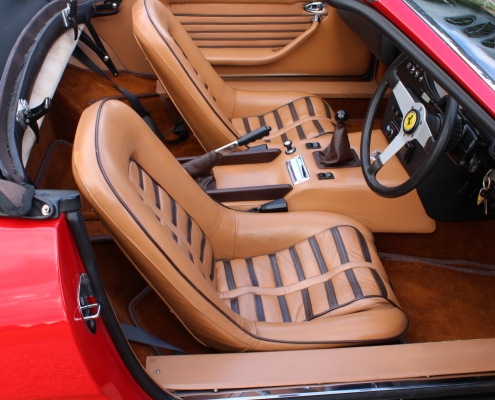 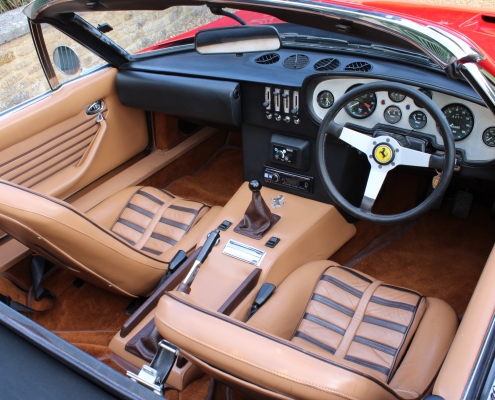 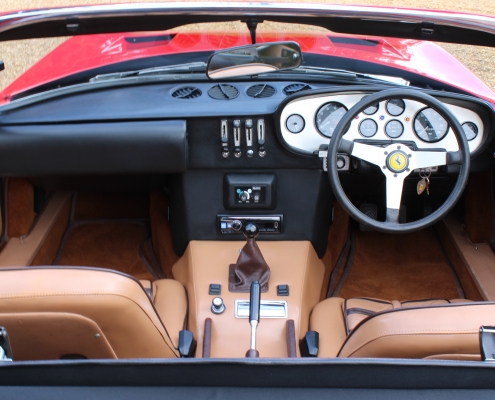 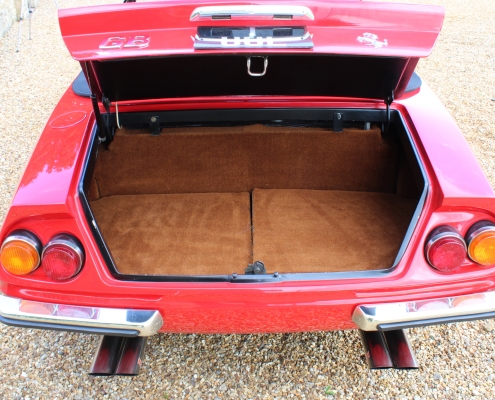 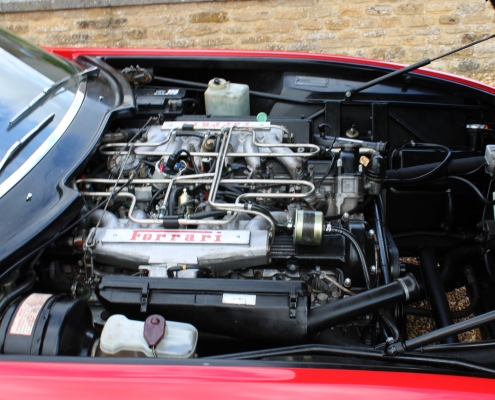 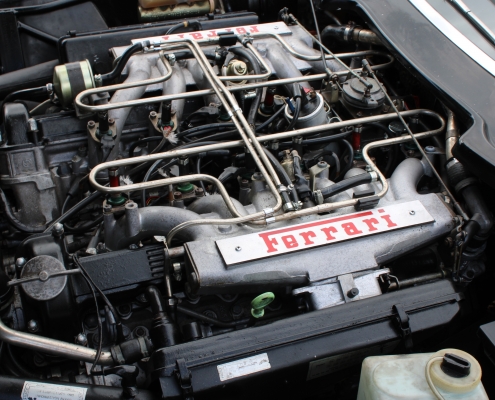 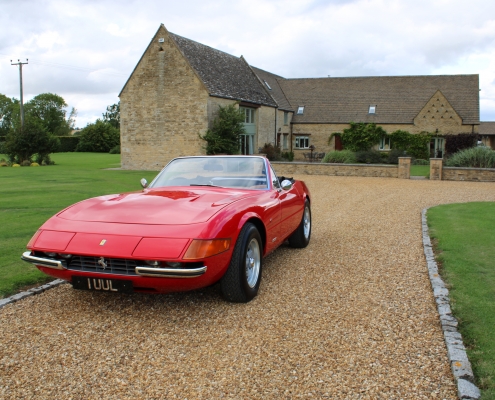 Superbly engineered by the industry respected EG Autocraft the leading experts in the field  V12 Jaguar engine and manual box. Jaguar drivetrain, brakes and suspension  GRP body on a multi-tubular chassis similar to the original. Main tubes are 3″ diameter. Sits on a set of Ronal Penta 15-inch wheels with three spoke replica knockoffs.

Only 122 Ferrari Daytona 365 GTS/4 Spyders were built originally and they very rarely come to market, but when they do the numbers are rather serious £1m plus  Even recreations of this timeless classic are hard to come by.

E.G. Autokraft was the work of Emilio Garcia and Peter Jacobs. Emilio hailed from Spain where he achieved some success preparing race cars locally. He then came to the UK and worked in coachbuilding and restoration before moving on to race preparation for Bell and Colvill. He eventually opened his own workshop and worked on many prestigious cars including Ferraris.

Having helped lots of Ferrari owners ”chop” their beautiful Berlinettas into Spyders, he decided to create the best Daytona Spyder copy he could and he turned to Peter Jacobs to make the bodies. Peter was universally recognised as the master of GRP and carbon fibre at that time and had created bodies for the RS200 Ford rally car and the ‘GTD’, a very well made Ford GT 40 replica.

The outside of their project car was naturally going to be an inch-perfect copy of the Daytona Spyder, however, the chassis had yet to be designed. They eventually settled on a multi-tubular framework similar to the original with 3” main tubes that was able to accept V12 or straight-six engines from Jaguar The floorplan was bonded to the chassis and the outer panels were originally available in GRP but later Carbon Fibre. Jaguar mechanicals( engine, drive train, brakes and suspension) were chosen as parts and service items were readily available.  Front /rear weight distribution was 47/53 very similar to the original car.

One of their marketing claims at the time was that the dimensions match the original so perfectly that genuine Ferrari parts could be used if required.  First registered in 1976, this beautifully finished Rosso Corsa Daytona recreation is constructed out of GRP and houses a V12 Jaguar engine and manual gearbox.The multi-tubular chassis holding the Daytona together is finished in black and is in excellent condition. Aural expectation has been resolved by replacing the whisper-quiet Jaguar exhaust with an ANSA system.

The ‘Daytona’ seats, door cards and the centre console are finished in a dark tan leather with dark chocolate piping and seat ribs, all in great condition and colour.

The cabin is very evocative of the original and is well executed.

On the road she is very powerful and well built without scuttle shake and very commanding with a well sorted chassis and running gear sounding great with a bespoke sports exhaust.

Back to listings
Facetime on PC
1972 TRIUMPH STAG MANUAL – SOLD