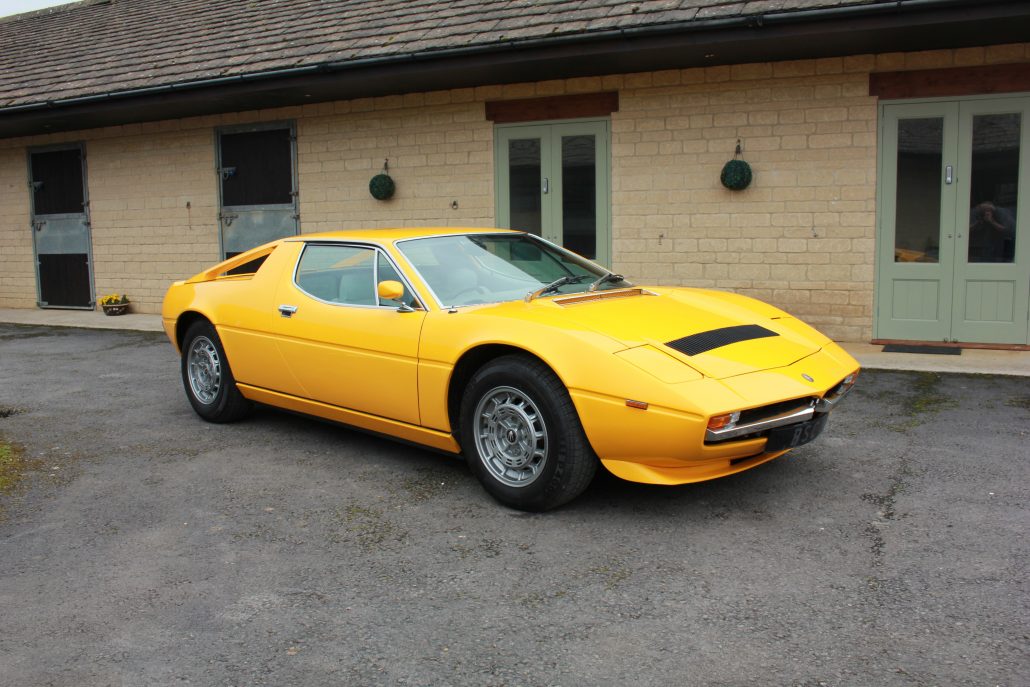 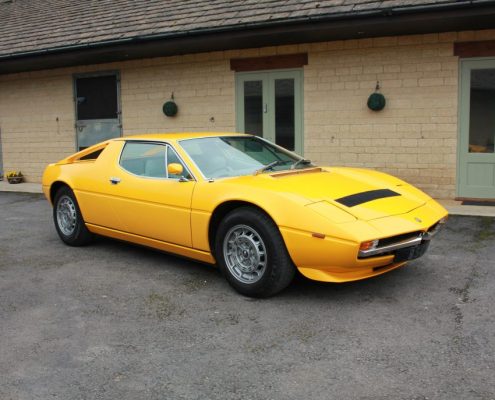 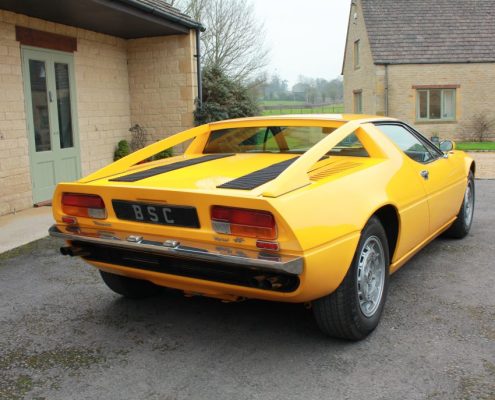 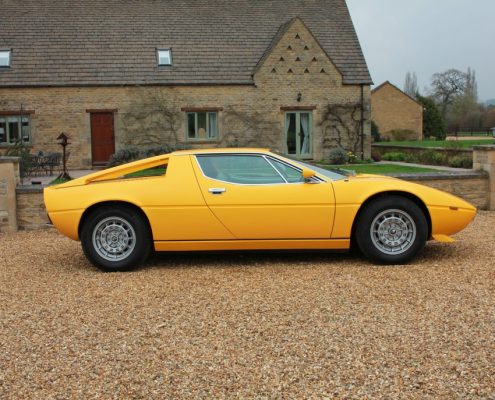 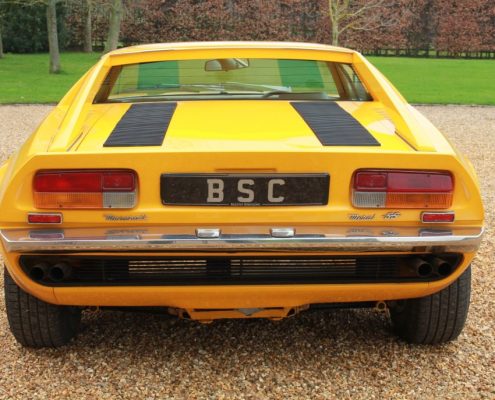 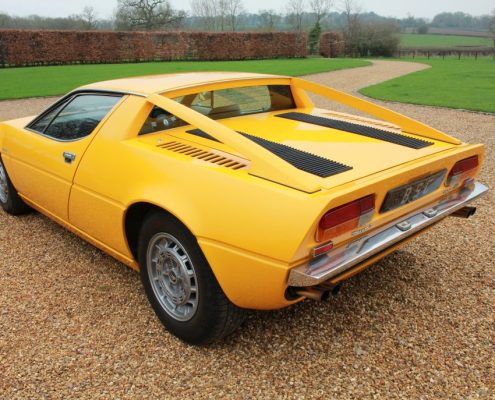 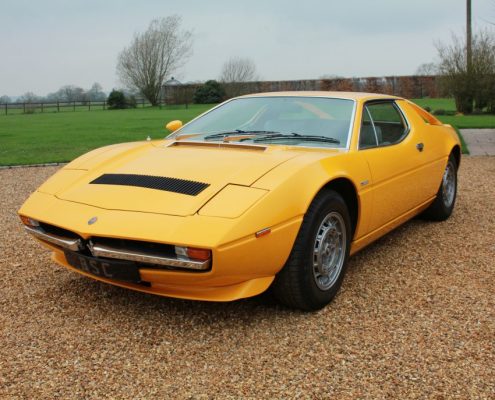 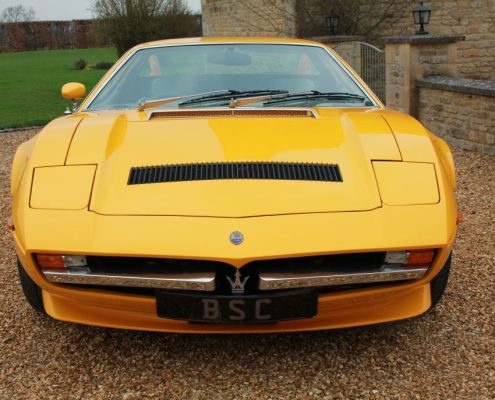 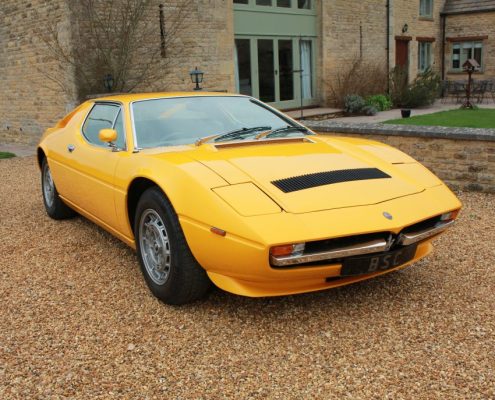 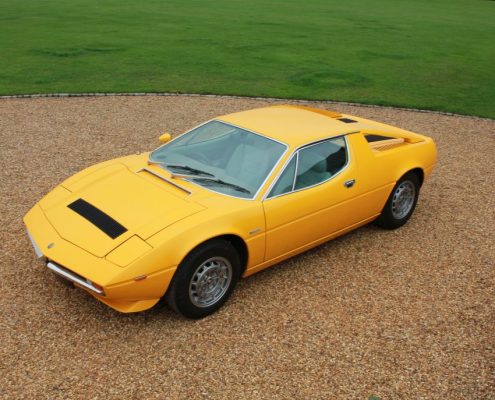 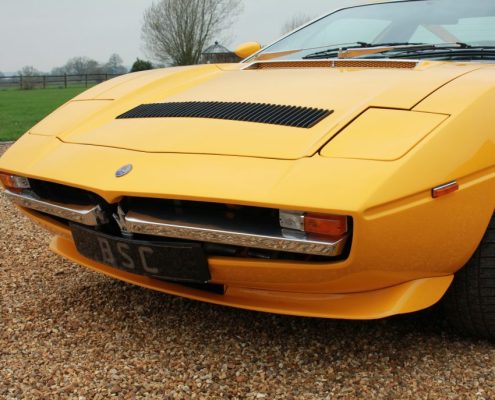 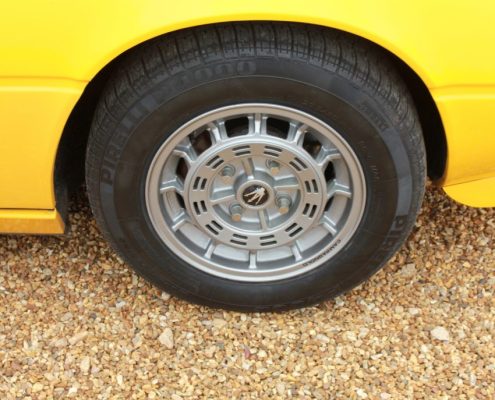 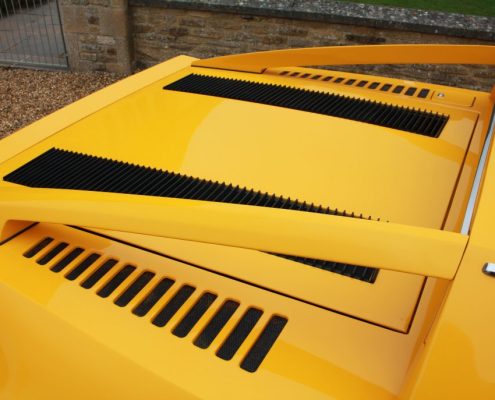 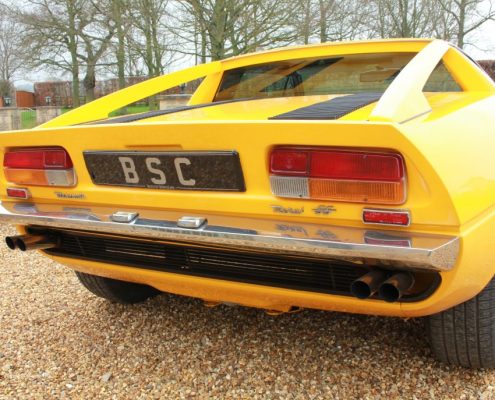 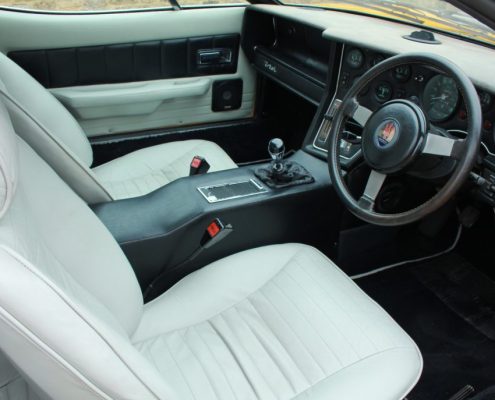 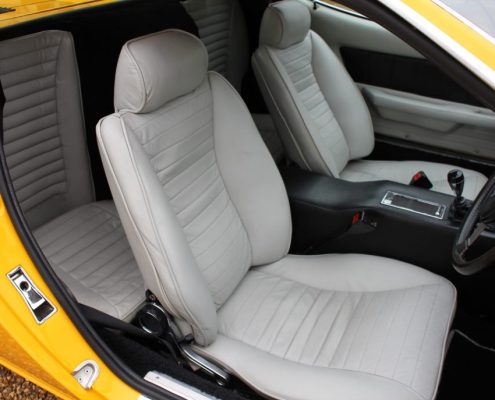 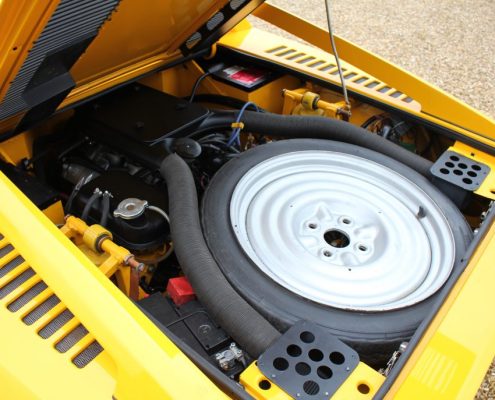 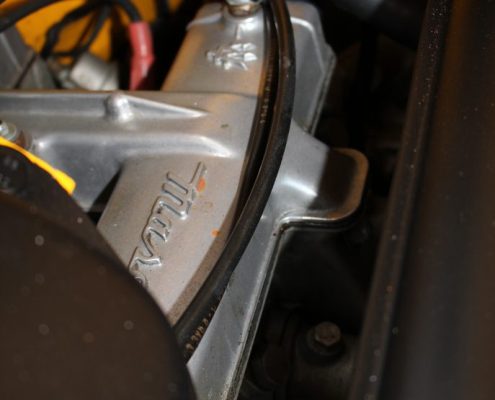 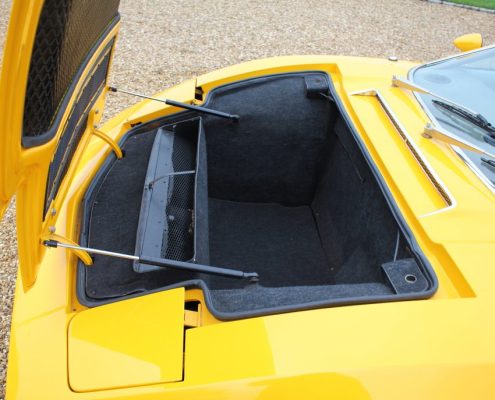 Maserati followed-up its first mid-engined supercar – the Bora – with the similar Merak a year later, the body design being placed once more in the hands of Giugiaro who cleverly used the Bora’s overall shape. Launched in 1972, the Merak was intended to compete with Ferrari’s successful Dino 246 and used a stretched, 3.0-litre, 190bhp version of the four-cam V6 that had debuted in the Citroën SM. Citroën owned Maserati at that time, and the Merak made use of the SM’s transmission, power-assisted disc braking and clutch. The later right-hand drive cars (such as our example) used the superb driver-oriented dashboard of the Bora. The unitary construction chassis and all-independent suspension remained basically as the V8-engined Bora’s, but being lighter the Merak’s handling was superior. Unlike the Bora, the Merak offered the convenience of ‘+2’ seating in the rear and superior all-round vision thanks to its distinctive rear ‘flying buttresses’. Competition from Ferrari’s new Dino V8 prompted the introduction of a lighter and more powerful version in 1975 – the Merak SS with 220bhp engine, larger carburettors, higher compression ratio and revised interior. Widely recognised as one of the finest, if not the finest, of contemporary V6s, the Merak SS engine proved smooth, powerful and capable of delivering its thrust over a surprisingly wide range for such a high performance engine. Like any true thoroughbred, the Merak possessed handling commensurate with its breathtaking acceleration and 150mph maximum speed. “Performance and handling are the raison d’être of a mid-engined sports car, and the Merak’s astounding cornering power is a match for its straight-line punch”, observed Motor magazine. Changes made to the SS suspension greatly improved ride comfort over that of the original Merak, while alterations to the instrumentation, switch gear, and interior, and other refinements addressed some of the criticisms levelled at the earlier version. The most successful Maserati of its day, the Merak ceased production in 1982 after 1,832 had been built, 626 of them being the SS version. Around a third of those were right hand drive. A total of 117 Merak SS were imported into the UK of which less than half are believed to have survived. Our stunning Merak SS is the ultimate model of Merak to own, being a late RHD UK-delivered car with genuine low mileage, the more desirable Bora dashboard, and in fabulous condition. Such examples very rarely come to market, especially in this condition, so this represents a very special opportunity.
With only 6 owners since new she presents beautifully and has enjoyed thousands spent at Mcgrath Maserati during the past 6 years ensuring she is amongst the best examples available.
A top end rebuild has also been carried out and she drives superbly with an encouragingly solid feel to the chassis/drivetrain unlike most poorly maintained cheap examples on the market that require full restoration.
Supplied fully inspected,serviced with a 12 month warranty.